Skip to content
In November 2017 Mozilla released a new and improved version of their browser. This version is called Firefox Quantum. Following that step forward, VirusTotal is releasing major revamp of its browser extension! You may install it at:
https://addons.mozilla.org/en-US/firefox/addon/vtzilla/

Historically VirusTotal had a very simple but popular firefox extension called VTZilla. It allowed users to send files to scan by adding an option in the Download window and to submit URLs via an input box. We had not updated it since 2012.

At the end of 2017 Firefox decided to discontinue support for old extensions and encourage everyone to update their extensions to the new WebExtensions APIs, a common set of APIs designed to be the new standard in browser extensions. As a result our existing VTZilla v1.0 extension no longer worked. At VirusTotal we decided to face this as an opportunity instead of an inconvenience and we started working on a new and improved version of VTZilla.

VTZilla 2.0 has been designed with various goals in mind. We wanted this new version to be easy to use, transparent to users and as customizable as possible. The first thing users will see when installing the extension is the VirusTotal icon. If you click on it you will see the different configuration options: 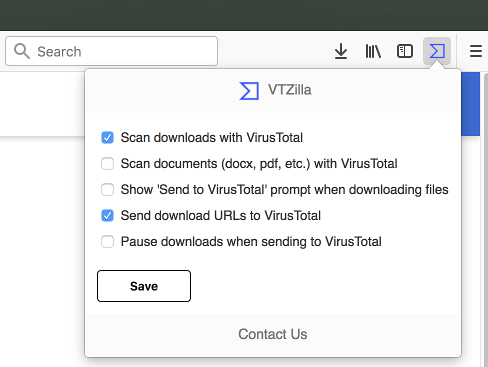 This will allow users to customize how files and URLs are sent to VirusTotal and what level of contribution to the security community they want.

Users can then navigate as usual. When the extension detects a download it will show a bubble where you can see the upload progress and the links to file or URL reports. 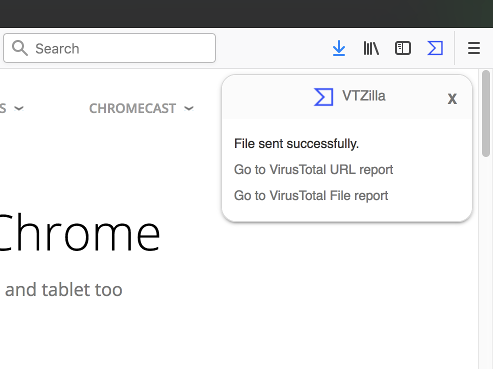 These reports will help users to determine if the file or URL in use is safe, allowing them to complement their risk assessment of the resource. This is a great improvement with respect to the former v1.0 version of VTZilla where we would only scan the pertinent URL tied to the file download. Then you would then have to jump to the file report via the URL report, and this would only be possible if VirusTotal servers had been able to download the pertinent file, leaving room for cloaking and other deception mechanisms.

VTZilla also has functionality to send any other URL or hash to VirusTotal. With a right button click users have access to other VirusTotal functionality: 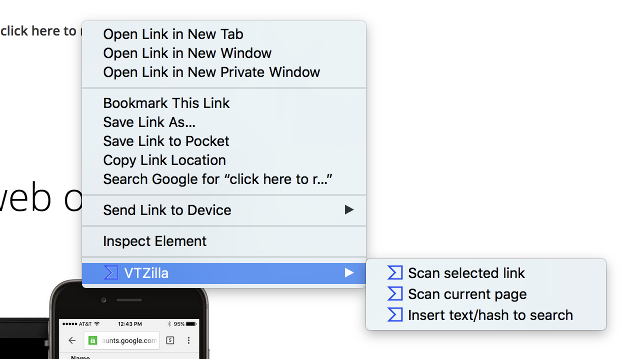 This is the basis for all future functionality. Feel free to send us any feedback and suggestions. We will be working to improve and add functionality to the extension. Thanks to WebExtensions we will also be able to make this extension compatible with other browsers that support the WebExtensions standard.

Soon after this major revamp we will be announcing new VTZilla features whereby users may further help the security industry in its fight against malware. Even non-techies will be able to contribute, the same way that random individuals can contribute to search for extraterrestrial life with SETI@home or help cure diseases with BOINC, stay tuned and help give good the advantage.